Jumping on, Jumping off! 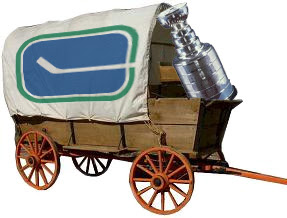 Ok, so it is playoff time in the city of Vancouver. The Vancouver Canucks are amidst the first round of the Stanley Cup Playoffs. Truth or not, the fans of Vancouver have often been described as bandwagon fans. Apparently, we jump on board when things are going well and jump off as soon as the tide turns against us. Those of you who follow NHL Hockey know that the Canucks won the first three games of their playoff series to jump out to a 3-0 series lead. All over the city, I heard talk of a four-game sweep, questions about who the Canucks might face in round 2, accolades being tossed around about the stellar play of goalie Roberto Luongo, the defensive play of Ryan Kesler and the offensive contributions of such a deep defensive core. Everything seemed so rosy and the Canucks were gaining new fans each day!

Well low and behold, the past three games have not gone the same way. Chicago dominated play in Games 4 & 5, found a way to win Game 6 and have shifted the momentum in their favor heading into the deciding Game 7. The talk of the town is now Roberto Luongo's poor play, Ryan Kesler's lack of offensive contributions and whether coach and player changes are necessary if the Canucks completely collapse.  Many of those so-called 'fans' have quickly become skeptics.

So, compare bandwagon hockey fans to educators' responses to new initiatives in education.  New initiatives are brought back to schools all the time.  Think of the last time you brought back a fresh idea from a workshop, conference or conversation with other educators.  Hearing the benefits and gains experienced by others, you probably got quite excited about the possibilities of implementing the idea in your school or classroom.  Your excitement likely caught the attention of some of your colleagues and they probably demonstrated their interest in the initiative by asking you for more details.  Exciting times, right? A chance to really push forward with something innovative, right? Full of enthusiasm, you probably started implementing it in your teaching and crafting plans for getting others on board.

Sometimes initiatives stick and become part of your regular repertoire of skills and strategies that you draw on from time to time.  Other times, you experiment with limited success, your excitement fades and gradually the initiatives fall into your 'black hole' of passing educational fads.  Each of us has our own 'black hole' of passing educational fads, full of strategies that might have worked for others but for some reason just didn't work us.  Sadly, when we allow our enthusiasm to drop off and we no longer push forward with new ideas, we default back to doing things the way we have in the past...sigh, the status quo.

Staying on board and pushing forward with new ideas is never easy.  You need to remain committed to its implementation even when you aren't met with immediate success.  You need to challenge yourself to build upon your successes, and reflect rather than be critical of your failures.  You must be willing to defend the merits of your ideas and acknowledge the need to improve upon its limitations. And more than anything, you must continue to envision where the initiative will take you, your colleagues and your students once you successfully implement it.

I challenge you (in your next blog or tweet) to define the initiatives you are jumping on board with and to not jump off the bandwagon!
Posted by Unknown at 10:08 PM