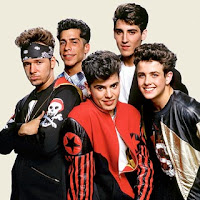 Do you recognize these 'kids'? Yes, the 'New Kids on the Block'!
They aren't so 'new' anymore are they?


As you chuckle at the photo above, I'm sure you're thinking "Kids just aren't like they used be!"

I'm going to guess that you've heard this comment many times before. Teaching colleagues, parents and employers have all made this comment. Unfortunately, when I hear this comment it often implies a negative connotation about kids or some notion of disbelief about a kid's actions. As much as I hate to admit it, I am guilty of having made similar comments out of frustration in the past.

The fact that 'kids just aren't like they used to be' is what drives forward progress.  They move us beyond the status quo and ensure that the world is constantly changing. Some argue that as a result of growing technologies the world is changing at a greater rate than it ever has in the past. Their fresh ideas and new ways of doing things challenge conventional wisdom.  As they expand their knowledge, gain real-world experience and combine this with new perspectives, they often contribute to the development of innovative ideas and solutions that make our lives easier and better.  It is hard to argue that advances in technology, medicine and even learning aren't contributing positively to society. However, these innovative ideas, while undeniably positive, often create emerging local and global challenges. But who better to adapt to these challenges and design solutions than the next generation of kids, who they themselves think and act differently than the generation before them.